Let’s get something out of the way. I am inherently skeptical of financial news headlines.


It’s not because they come from bad organizations who have bad intentions. These organizations can produce some incredibly rich content.

It is because they are not financial advisors and they don’t know anything about the investor on an individual level.

The revenue model of Bloomberg, BNN, etc, is not to manage you to or through your retirement. It is to keep you engaged in their content and to advertise to you. While they may interview money managers and strategists, very rarely do mainstream financial pundits have skin in the game; and they certainly can’t assess the nuance between one investor and another.

So, when I saw this headline, I literally laughed out loud. 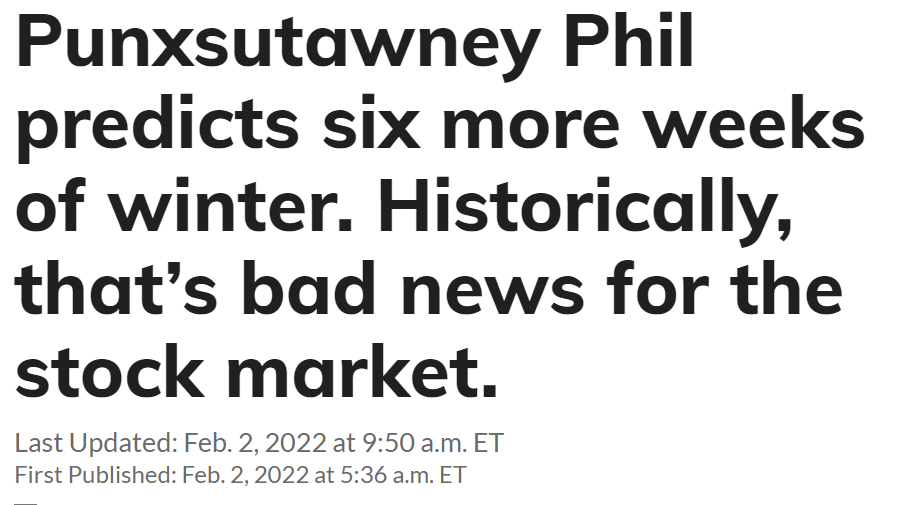 The headline is misleading enough. It implies that the market is going to be bad because Punxsautawney Phil (the most famous groundhog in the US for those who don’t know) predicted a long winter. The article itself wasn’t much better. It references a research paper that shows that, for buy and hold investors, returns are 2.7% better when Phil doesn’t see his shadow and predicts an early spring.

Groundhogs cannot predict the stock market. No one can.

While this may be obvious to most, navigating your way through most predictions and research may not be. There are a number of things you need to consider.

Correlation does not equal causation

I have been a big fan of The Simpsons since I was a kid. One of my favourite episodes was “Bear Patrol”. Homer confidently states, “not a bear in sight. The bear patrol must be working like a charm”. Lisa then attempts to show him that her rock keeps tigers away because there are no tigers around. At which point, he offers her money for her rock.

This simple example clearly illustrates the concept of spurious correlation. It is the idea that two factors may appear to be linked to each other, but they are not.

In the case of the Groundhog study, one of the conclusions drawn is that for the 30 days after the groundhog’s “prediction”, the markets are materially better when an early spring is expected. The proposal is not that better weather means better economic activity, because we know that the groundhog is generally only right 50% of the time; rather, the study aims to show that people are in better spirits when they think the spring is coming early, and therefore they are willing to invest accordingly. It’s an attempt to show a new “behavioural factor” at work.

But the research paper drew its conclusions on the basis of 92 groundhog predictions. 92. And only 14 of these years involved an early spring prediction.

The market is made up of millions of participants trading trillions of dollars daily. And it has evolved considerably over the past 92 years. So, to assume that there is a strong relationship that can be drawn based on 1 groundhog with a small sample size is absurd

I don’t fault them for looking at this. This sort of research is critical.

But as an investor you need to understand that not all research is created equal. And by the time it reaches the headlines, the message is often distorted from its original purpose.

Don’t make significant moves in your portfolio based on questionable short-term indicators, and exaggerated headlines.

If you are reading it on the news, it is probably too late

Past performance does not equate to future results.

Consider for a minute, if you had a fool-proof trading strategy that worked time and time again without fail, would you make it public and risk losing that “information edge”?

Research is done with the benefit of hindsight. By the time that a strategy has been identified and has become mainstream, it is typically far less effective than it had been in the past.

The January effect, Sell In May And Go Away, End of the Month Effect, etc. These are all investing concepts that worked at one point but are, for the most part, are no longer useful.

As with any investing strategy, while the past is important to consider, you always need to be looking to the future.


Investing is an emotional business. We are pre-disposed to be guarded and fearful to protect our hard-earned wealth. So, headlines that portray a negative expectation inevitably fuel that fear. Negative news sells. It generates clicks and attention. But you need to condition yourself to expect this, and as always, make balanced decisions for your own specific circumstances.

At the end of the day, markets, the economy, and the weather are extremely complex.

And I wouldn’t trust a groundhog to predict any of them.